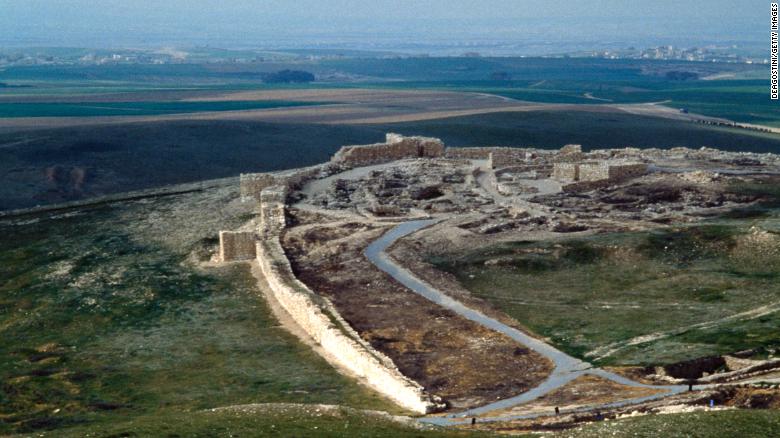 Shown here is a view of the Canaanite city ruins in the lower area of the Tel Arad archaeological site, Israel.

(CNN)If there were any more fun facts to learn about cannabis, its ritualistic use at a biblical site in Israel can now be added to the list.In 1963, two limestone altars were found at the entrance to the “Holy of Holies” of a Judahite shrine at Beersheba Valley, in Israel’s Tel Arad, an archaeological mound located west of the Dead Sea and surrounded by mountain ridges known as the Arad Plain.The site is divided into a lower city and an upper hill. Inside the site, there is a shrine devoted to Yahweh, the Hebrew name of God used in the Bible.

Analysis of the materials on two altars, now housed in the Israel Museum, Jerusalem, found they contained cannabis and frankincense, according to a study published Thursday in the journal Tel Aviv. 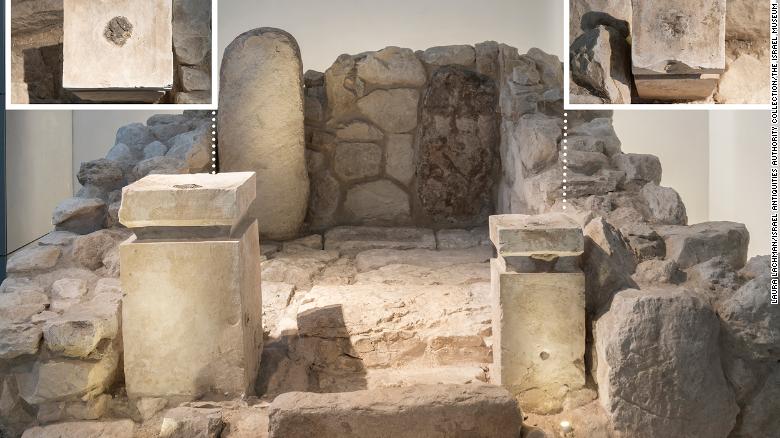 This is the frontal view of the cella of the shrine at Arad, as rebuilt in the Israel Museum from original archaeological finds.This is the first time that physical evidence of cannabis has been identified in the Ancient Near East, according to the study authors.

“We know from all around the Ancient Near East and around the world that many cultures used hallucinogenic materials and ingredients in order to get into some kind of religious ecstasy,” said lead author Eran Arie, curator of Iron Age and Persian Periods archaeology in the Israel Museum, Jerusalem.”We never thought about Judah taking part in these cultic practices. The fact that we found cannabis in an official cult place of Judah says something new about the cult of Judah,” Arie said. The study’s finding regarding frankincense also provided further insight into the ingredients used in Jerusalem incense, he added.

Several other cultures, such as the Gaddi tribe of the Himalayas, the Buganda kingdom of Africa and the Tenetehara of Brazil, have used cannabis recreationally and for ecstasy in cultic ceremonies, according to previous studies.Some tribes also used cannabis for medicinal purposes, the study said. A 1993 study on the materials on the remains of a teenage girl who died during labor in an ancient cave in Jerusalem found cannabis was likely used to reduce childbirth pain.”What stands out most to me is that cannabis was used in concert with frankincense, rather than being mixed with frankincense or other identifiable plant products,” said Robert C. Clarke, an independent ethnobotanical researcher who was not part of the study. “This implies that there were special independent connotations assigned to the use of each plant substance.”

History of a biblical site

Tel Arad was excavated between 1962 and 1967 by the late archaeologist Yohanan Aharoni, on behalf of the Institute of Archaeology of the Hebrew University of Jerusalem.Excavations revealed two superimposed, squared fortresses that dated back to the ninth to early sixth centuries BCE and guarded the Judahite kingdom’s southern border. More finds were unearthed, including Hebrew ostracas (stones with writings) and the shrine.The Arad shrine was discovered after Aharoni discovered a cella, a small room holding cult objects. The shrine is located in the northwestern corner of the fortress and is about 42 feet across and 62 feet deep. It holds four areas: a fenced-in open courtyard; a storage area north of the courtyard; a main hall west of the courtyard and storerooms; and a small cella west of the main hall.

Perfectly preserved ancient Roman mosaic floor discovered in ItalyPrevious research suggested the shrine was built and used from around 750 BCE to 715 BCE, less than half a century. Around this time, Judah was mostly comprised of rural settlements. The cella was considered to be the heart of the shrine, thus called “Holy of Holies.”The Arad shrine and the First Temple of Jerusalem, constructed sometime around the tenth century BCE, are architecturally similar, the study said, considering the east-west axis upon which they both are built and how the areas are divided — a likeness which could allude to similarities in cultic rituals performed in these structures, the study added.According to previous research, the shrine may have been buried for ritual reasons, or a desire to protect it from the dangers of Assyrian occupation and destruction, the study said.In 1963, the limestone altars were found lying between the main hall and cella. Around this time, the Israel Museum was under construction in Jerusalem. The original stairs, floor and furniture of the shrine were transferred to an exhibition at the museum in 1965, and from 2007 to 2010 the exhibition was moved to a new gallery.

Bad to the bone: Cannibal dinosaurs turned to eating each other in tough times“This was the point I realized for the first time the real incense was really left there,” Arie said.Because the walls of the shrine weren’t intact in the museum, the museum decided to reconstruct the wall with stones from Tel Arad to further the exhibition’s significance. Though the excavations were more than 50 years ago, some studies of the materials left on the altars have been inconclusive and no final reports have been issued.It was roughly two years ago when Arie realized the potential for modern techniques to shed more light on the materials used and rituals performed in the shrine.

The researchers weren’t certain about the nature of the rituals or cultish practices the substances might have been used for, but they were able to test the materials.Small samples of the materials on the altars were taken with a scalpel and preserved in aluminum foil. To substantiate the results and prevent cross contamination, testing was repeated in two laboratories at the Israel Institute of Technology, Haifa, and the Hebrew University of Jerusalem, Givat Ram.Liquid chromatography and gas chromatography, two main, modern methods for identifying cannabinoids, were also used.The small altar’s material contained residues of cannabinoids including cannabidiol (CBD), tetrahydrocannabinol (THC) and cannabinol (CBN), the byproduct of THC when THC degrades. 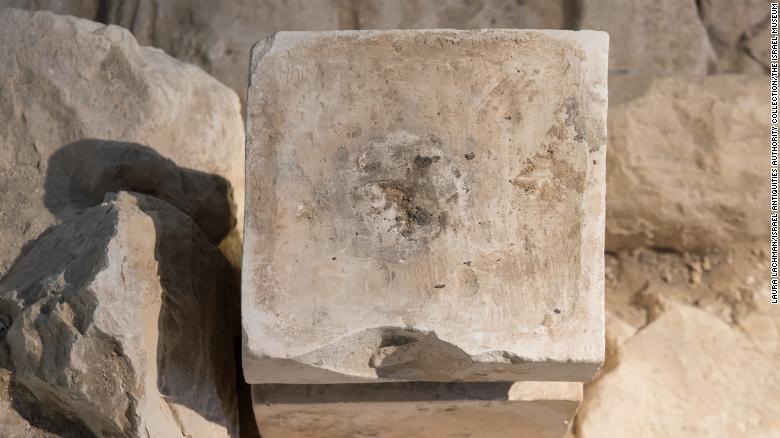 The material atop the small altar of the shrine contained cannabis compounds and animal feces.Fatty acids found in the material were attributed to mammal sources, especially since animal hormones including cholesterol and testosterone were discovered along with the fatty acids. There was also evidence of mammalian feces.CBD and THC are the psychoactive compounds of cannabis, the ones that alter a person’s mental or physical state. However, CBD and THC derive from the cannabinoids tetrahydrocannabinolic acid (THCA) and cannabidiolic acid (CBDA). THCA and CBDA have to be heated before they release the activated, potent and psychoactive compounds both found on the small altar and that people are familiar with today.Once the cannabis and animal feces were set afire, the waste could have allowed a slow, low temperature burn that was conducive to group inhalation, the study suggested.According to the study, these findings suggested that cannabis was burned for a psychoactive role as part of a ritual, since the use of hallucinogenic substances for cultic purposes in the Ancient Near East has been documented.Terpenoids, which determine the scent of flowers, fruits and grasses, were also discovered. Since the smell akin to cannabis is available in many plants, the authors concluded the cannabis wasn’t imported for its smell or therapeutic qualities, but for its “mind-altering abilities.”

Hundreds of fossilized human footprints found in Africa could reveal ancient traditions“If you really wanted only the odor or the fragrance of cannabis, you could’ve burned sage,” Arie said. “Only when you are burning cannabis are the [psychoactive ingredients] released into the air. So it’s not a matter of smell like with the frankincense; it’s a matter of the ecstasy and the hallucinogenic effects from the burning cannabis.”How cannabis arrived in Tel Arad is unknown, but since there are no known cannabis seeds or pollen remains in archaeological sites in the Ancient Near East, the cannabis was likely imported in hashish form — cannabis extracts that are compressed into shapes.”As shown in this study, eighth century Judah may now be added to the places where these rituals took place,” the study said.

Atop the big altar were terpenoids, or organic compounds, and more fatty acids. The terpenoids are associated with frankincense resin, while the fatty acids, also accompanied by hormones, were likely from mammalian fat as well.Frankincense resin is a fragrant yellowish to red plant discharge produced by cut bark from types of Boswellia trees, which grow naturally in Africa and southern Arabia. 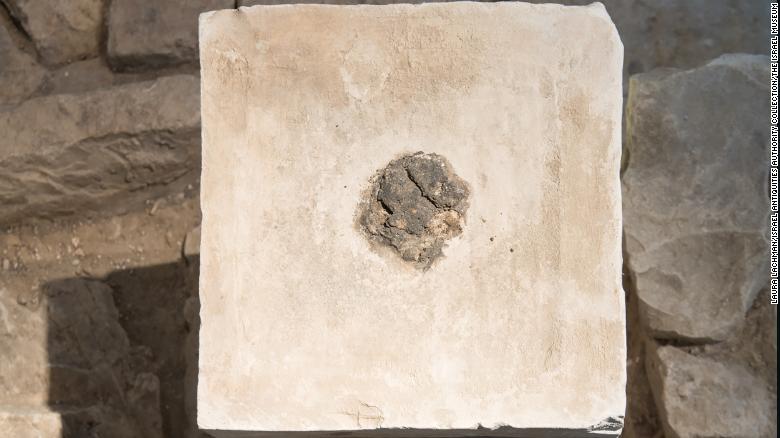 Frankincense and animal fat were discovered atop the big altar of the shrine.Frankincense was highly valuable, the study said, as reflected in the Bible when frankincense’s price is often compared to gold and precious stones, described as a royal treasure and celebrated for its fragrance. It was also esteemed in Assyria, Babylonia and Persia, and the authors attributed the high price to the efforts required for its import to demanding regions.Judah’s participation in South Arabian trade and Assyria’s later presence in Tel Arad around the end of the eighth century BCE could have contributed to the movement of frankincense in the area.Frankincense may have also been used for cultic ceremonies; the discovery in Arad is the first identification of the substance used in such a context. The animal fat present may have allowed the frankincense to burn at a higher temperature, which is required for frankincense to evaporate and release its fragrance. Frankincense is a component of the incense that was burned in the Temple of Jerusalem for its aroma.

Earliest evidence for modern humans, and their handmade pendants, found in Bulgarian cave

The high price of frankincense further implied the fort of Arad was an official institution of some distinction, the study said, owned by the Kingdom of Judah. As part of the kingdom, the residents of the fort possibly had the resources to obtain such esteemed materials.The authors contended that the substances discovered in this study could serve as an extra-biblical source to identify incense used in cultic practices in Arad and elsewhere in Judah.