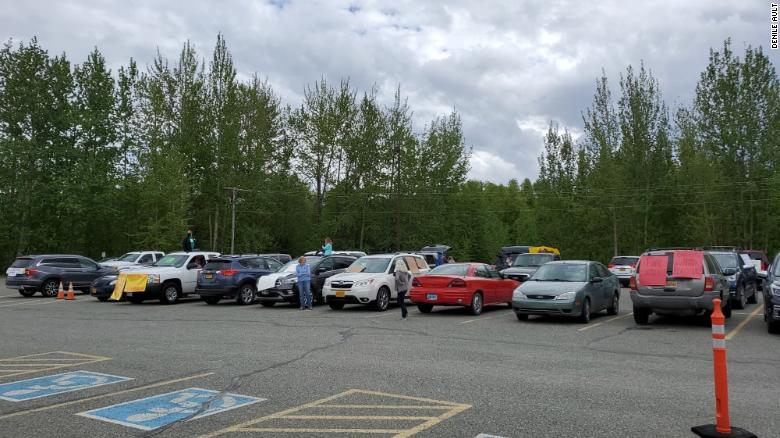 More than 80 cars showed up to protest a previous decision by an Alaska school board to remove five books off reading lists.

(CNN)An Alaska school board that fell under the national spotlight after removing five books from high school reading lists has rescinded its vote.The Matanuska-Susitna Borough School District in Palmer voted in April to scratch five books off the district’s curriculum for high school English elective courses. On Wednesday, six members voted in favor of rescinding that vote and taking another look at the proposed curriculum and books.

These books are gaining ground in an Alaskan town after a school board voted to remove them from classThe books the board had voted against were F. Scott Fitzgerald’s “The Great Gatsby”; Ralph Ellison’s “Invisible Man”; Joseph Heller’s “Catch-22”; Tim O’Brien’s “The Things They Carried”; and Maya Angelou’s “I Know Why the Caged Bird Sings.”

The books were deemed controversial because of concepts including sexual references, rape, racial slurs, scenes of violence and profanity, according to the district’s Office of Instruction. Angelou’s book, the office said, includes “sexually explicit material such as the sexual abuse the author suffered as a child” as well as “‘anti-white’ messaging.”

The board’s April vote drew backlash from hundreds of community members and residents across the US as well as organizations like the American Civil Liberties Union. A famous band even chimed in to say it’d send the removed books for free to any student in the district who wanted them.

Rock band Portugal. The Man will send kids the books an Alaska school district bannedIn a board meeting earlier this month, dozens testified against the decision. And during the board’s latest meeting, at least 80 cars showed up outside the district’s building to protest, according to Wasilla resident Denile Ault, who was there. Nearly 600 tuned in to the meeting’s livestream.Sabrena Combs, Palmer City Council member, told CNN that she was pleased with the “small victory” but said she recognized “we have a long road ahead of us to ensure curriculum for our students is to the standard we desire as parents and community members.””At this point, I feel the access to important works of literature for students and teachers is being threatened as the majority of the school board wishes to revisit this topic within the next year,” she added.Residents of the community have said last month’s vote was no different than banning the books, but board members doubled down Wednesday on the fact that the books would still be accessible and could still be read by students on their own time.”The school board did not ban the books, did not preclude their use by teachers and did not remove the books from school libraries,” member Ryan Ponder, who was the only member to vote against rescinding, said Wednesday. “The narrative that has been put out there is not the accurate narrative.”

Member Jim Hart, who voted in favor of rescinding, read an excerpt from Angelou’s book during the meeting in which the author describes sexual abuse.Before reading it aloud, Hart said he wanted to give parents a moment to remove any young children if they deemed necessary to do so.”When you talk about sexual content,” he said, “… it really does come down to propriety so I wanted to read that for the record so people can know what we’re talking about.”Hart’s decision to read the excerpt drew a loud response from the district’s superintendent, Monica Goyette, who said she was “deeply offended by that.”

“That is not sexual content,” she said. “That is rape of a child. A teacher would have prefaced that section by talking about rape as a child. It should be read as a child being raped.””I read the text as it came into the book and I read it heartfelt,” Hart said, “and I also said it was tragic.”