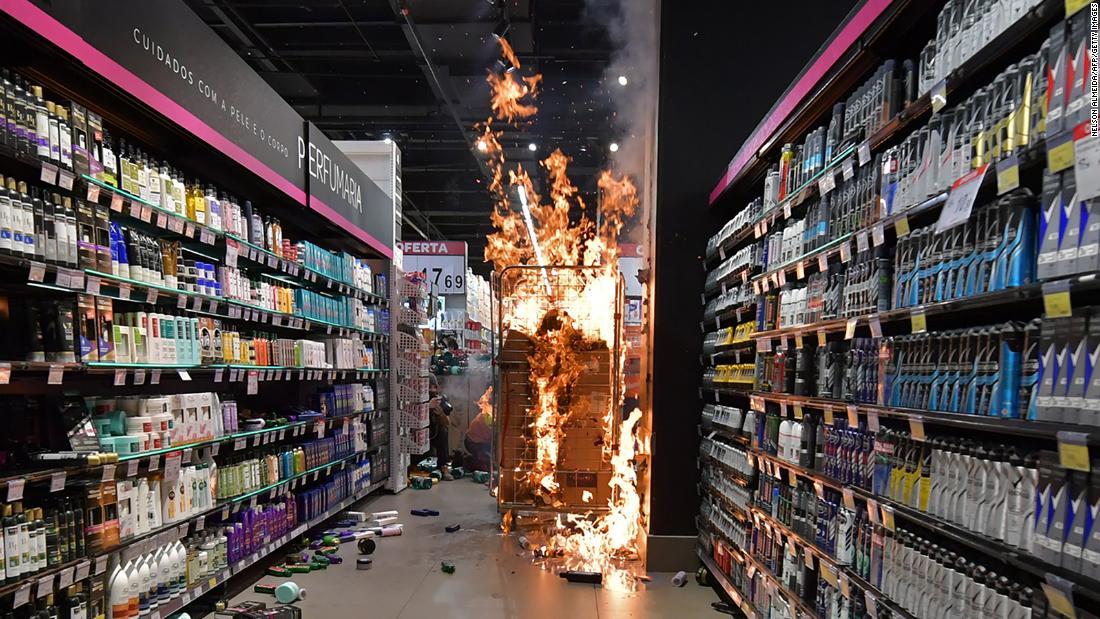 Products burn at a supermarket Carrefour in Sao Paulo, Brazil, on November 20, 2020 on Black Consciousness Day during a protest against racism.

Sao Paulo (CNN)Brazilians outraged by the death of a Black man after being beaten by supermarket security guards have been protesting in major cities across the country, chanting a phrase familiar to Americans: “I can’t breathe.”Security camera footage from a Carrefour supermarket in the southern city of Porto Alegre obtained by the Brazilian news program Fantástico shows two security guards escorting João Alberto Silveira Freitas out of the store on November 19. Freitas, for reasons unclear, appears to punch one of the men.The guards then beat him, including with blows to his head, knocking him to the ground and pinning him face-down with a security guard’s knee bearing into his back and neck. After several minutes immobilized by the guard, during which numerous shoppers, employees and other guards appear to stand by as Freitas moans and struggles, he stops moving.

The police chief investigating the killing said Freitas appeared to have died from suffocation, according to CNN affiliate CNN Brasil. A preliminary analysis by the state’s General Institute of Forensics said the death was due to asphyxiation, the newspaper Folha de S. Paulo reported. Freitas’ father has called the death a “murder” in interview with CNN Brasil and demanded justice.

The two security guards have been arrested but have not been charged. Carrefour quickly announced that it suspended its contract with the private security firm that employed the guards and that the manager on shift had been fired. An attorney for one of the guards told CNN Brasil that his client did not intend to kill Freitas and that he had only sought to “contain” him after being called in to respond to a “quarrel” occurring between Freitas and an employee. The second guard reportedly fired his attorney on Tuesday, and CNN has been unable to contact his new legal representation.

Freitas, a 40-year-old father of four, died on the eve of Black Consciousness Day, an official holiday in many Brazilian cities that honors the country’s African heritage. Waves of protests have followed — but been dismissed by Brazilian President Jair Bolsonaro as imported “foreign tensions.” 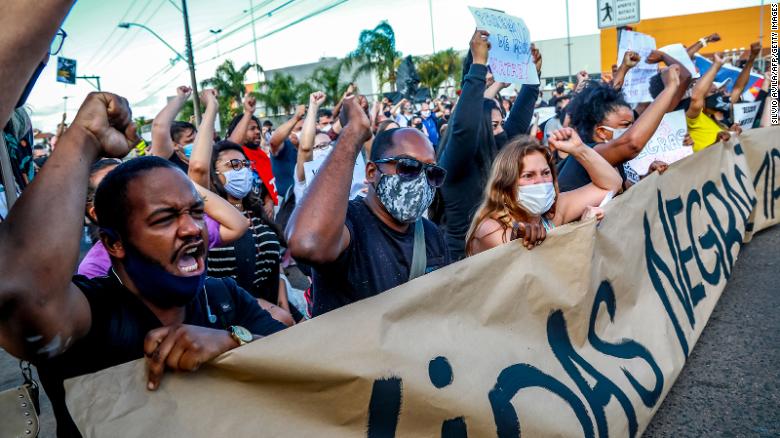 The brutal footage, which showed many passive bystanders, has helped precipitate protests in a country where the treatment of Black Brazilians is increasingly under scrutiny, according to Thiago Amparo, a professor and coordinator of the Racial Justice and Law Lab at the Getúlio Vargas University (FGV) in São Paulo.”There is an increase in mobilization in Brazil concerning the deaths of Black people, especially by Black movement groups,” he said. “When Freitas’ death happened, it occurred in a society more mobilized around structural racism.”Many Brazilians reject the idea that their country is democratic melting-pot free of discrimination, pointing to racial disparities in numerous facets of daily life, including lethal violence. In May, as the United States grappled with the death of George Floyd, demonstrators in Rio de Janeiro protested at the governor’s mansion under the banners “Black Lives Matter” and “Stop Killing Us” to denounce the alleged police killing of a Black 14-year-old in a favela on Rio’s outskirts. 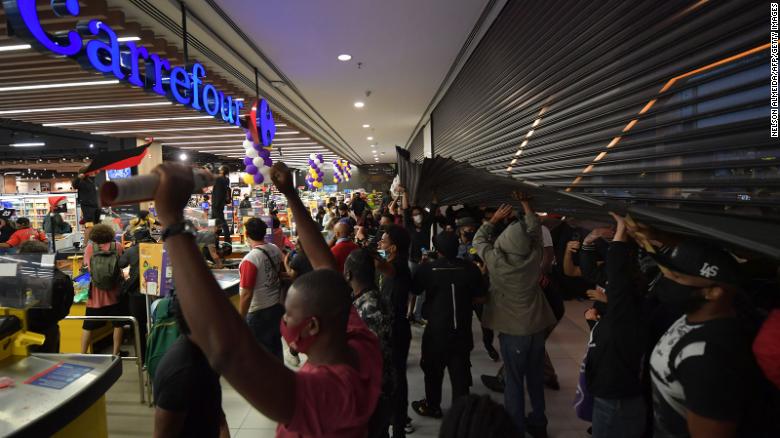 Demonstrators on November 20, 2020 during a protest against racism.According to the Brazilian Public Security Forum (FBSP), a São Paulo-based research group, Black and mixed-race Brazilians make up a little over half of the general population, but constitute 79% of people killed by law enforcement in a country that averages an extraordinary 17 police killings per day.Reached for comment about the FBSP’s findings, the Brazilian Justice Ministry responded that any incidents involving military police enforcing public security “must be investigated within the scope of the various competent bodies.”Protests over killings by police are so common in Brazil they have a distinct look: shirts emblazoned with the photos of a lost loved one and their date of death, painted banners calling for justiça.

How a yellow jersey is dividing BrazilAna Paula de Oliveira, a mother and activist whose son entered into those daily statistics after he was shot in the back in 2014, said there is a pattern of violence against Brazilians who are poor and Black.”Those of us who live in the favelas see this violence daily: a slap when police frisk you, breaking into your house without a warrant. And if I question it, I get beaten up,” she said of daily life in Rio de Janeiro’s low-income communities.Brazil’s supreme court has ruled that police can enter people’s homes without a warrant if they have “well-founded reasons” to believe a crime is occurring.Poverty is disproportionately a burden for Brazilians of color. More than 40% of Black and mixed-race Brazilians live below the poverty line, compared to less than 20% of White Brazilians, according to the Brazilian census bureau (IBGE). 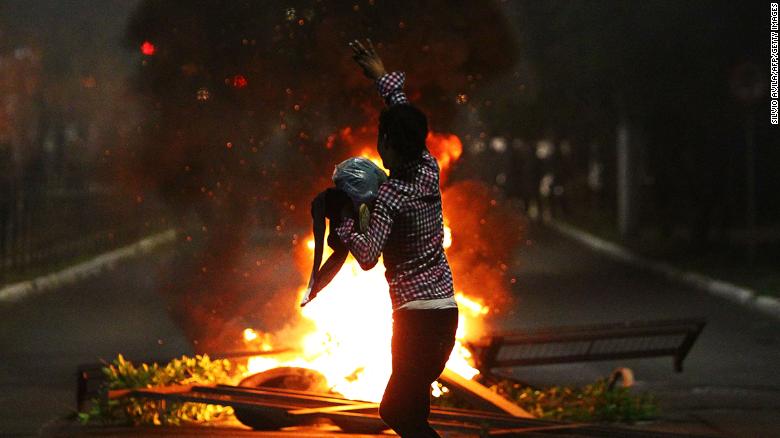 A man demonstrates in front of a bonfire during a protest against the death of Joao Alberto in Porto Alegre, Brazil on November 23, 2020.Marisa Feffermann, a coordinator with the Genocide Protection and Resistance Network, an organization of social movements that protests state violence, attributes aggressive policing in the country in part to the fact that officers responsible for public security in the streets are officially part of Brazil’s Armed Forces. “The military police must end because everyone suffers from this rhetoric of war,” she said.Considered preventive law enforcement bodies, military police in Brazil are independently controlled by each state and the capital district of Brasilia.Promoting himself as a ruthless public security hardliner has been central to rightwing President Jair Bolsonaro’s brand. Campaigning for the presidency in 2017, he gave an interview in which he sought to defend the police and promote Brazilians arming themselves, famously saying that “a policeman who doesn’t kill isn’t a policeman.”Bolsonaro’s government has said that the administration does not advocate police violence.Meanwhile, many conservative Brazilians deny that racism is a systemic problem in the country.

Amid widespread Black Lives Matter protests this weekend, Bolsonaro blamed “foreign tensions” that had been “imported” to Brazil” during a speech before the G20. He described Brazil as a culturally rich, mixed-race nation, and added, “There are those who want to destroy it and replace it with conflict, resentment, hate and division between races, always cloaked as ‘fighting for equality’ or social justice’.”He did not mention Freitas by name — nor has he ever.Bolsonaro’s vice president, Hamilton Mourão, has also been adamant that race did not play a role in Freitas’ killing. “Racism doesn’t exist in Brazil,” he said when asked about the incident by journalists the day after Freitas’ death. Mourão, a retired Army general, said that police violence in Brazil was related to income inequality, though he acknowledged that Brazilians of color are more likely to be poor.While she did not mention Freitas’ skin color, Bolsonaro’s human rights minister, Damares Alves, struck a sober tone, tweeting: “The life of another Brazilian was brutally taken away in a supermarket parking lot in Rio Grande do Sul. The images are shocking, and we are outraged and indignant.”The French-owned supermarket chain where the crime occurred, however, has linked Freitas’ death to racism. “João Alberto’s death must not be in vain. For that reason, we are today making a commitment to help combat structural racism,” Noel Prioux, CEO of Carrefour Brasil, said in a video message. The supermarket chain also announced that it would donate all of its revenues from sales across the country the day after the killing to anti-racism projects.

While public outrage has made Freitas a national name, Oliveira, the mother and favela-based activist, said she also protests in memory of her son and other victims of racial violence who have been forgotten.”Those who died many years ago are forgotten,” she said. “As long as I breathe, I will be my son’s voice. They were victims of a state, of a country that is racist, that kills its Black people.”