Jeremi Suri holds the Mack Brown Distinguished Chair for Leadership in Global Affairs at the University of Texas at Austin, where he is a professor of history and public affairs. He is the author and editor of nine books, most recently “The Impossible Presidency: The Rise and Fall of America’s Highest Office.” The views expressed here are his. Read more opinion on CNN.

(CNN)Reading former President Barack Obama’s sad and hopeful memoir, one can feel his passionate love for the United States: “The pride in being American, the notion that America was the greatest country on earth — that was always a given.” America is a place for Obama but also a “promise” of a more perfect union, with rights and dignity for all. No other society is so open with possibilities. No other society is filled with young men and women from such diverse backgrounds who love their country so much. 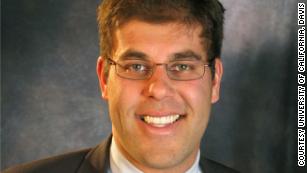 Jeremi SuriWhatever else 2020 has shown us about ourselves, it has revealed how much the stubborn presence of racism and partisanship curtail the reality of this American dream for so many. Obama’s memoir is a further testament to how inherited hatreds and habits, magnified by modern media, make it exceedingly difficult to reform outdated institutions. As Obama’s popularity grew, so did the resistance to who he is and what he stood for — and the obstruction to his efforts to pass meaningful legislation. Opponents labeled his proposals “socialism” and demagogues questioned the fact of his birth in the United States. “My very presence in the White House,” Obama recounts, “triggered a deep-seated panic, a sense that the natural order had been disrupted.”

Other Presidents had felt the sting of partisanship before, and some had found temporary unity in the use of force overseas. But that is not enough, especially now, when our country faces so many serious policy challenges. “A Promised Land” reminds readers of what we can be as a humane, democratic society, and it also explains how a President cannot do it alone. The leader of the free world has power to affect many lives, for better or worse, but he has comparatively little ability to reform our decaying institutions and harmful behaviors without cooperation from lawmakers and fuller participation from citizens.

Obama ran an exciting campaign on restoring equity and opportunity to Americans, but he spent most of his difficult presidency holding off one disaster after another. His recollections of his first term in office are filled with repeated frustrations and regrets, born of the crises that repeatedly took him off track. He inherited an economy teetering on depression, rapidly degrading domestic infrastructure, failed wars in Iraq and Afghanistan and aggressive adversaries in Russia, China, North Korea and Iran.

Obama gets personal in interview with Oprah 01:52Meanwhile, Obama could not close the military detention facility in Guantanamo Bay, Cuba. That more than 200 detainees in the prison were being held without due process or public trial was a blight on America’s international image, but the President could not secure approval for another location to hold the detainees or a country that would take them in. Guantanamo remains open as an extrajudicial jail for alleged terrorists the United States has still not tried in a court of law. Obama laments that he was criticized by foreign policy hawks for questioning firm anti-terrorist measures and condemned by civil liberties activists for continuing to circumvent American law. Yet, he had no viable alternative, despite repeated efforts to find one.So much for a powerful, transformative American presidency. Obama’s memoir exposes how hard it is for a reform-minded President to get anything done. He did muscle the Recovery and Affordable Care Acts through Congress, bailing out large segments of the economy and creating the first public health insurance option for all citizens, with indispensable legislative assistance from House Speaker Nancy Pelosi. Obama also signed the Dodd-Frank Wall Street Reform and Consumer Protection Act that limited risk-taking by financial institutions and created a federal body to police predatory lending. Those were significant and enduring achievements.

Nonetheless, Obama recounts how even these achievements became half-measures because of the organized opposition from industries, special interests and especially Congressional Republicans determined to oppose anything coming out of the White House.

Here are the key revelations in Obama’s new memoir 04:15This opposition blocked headway on numerous other issues, despite strong popular support. Legislation aimed at economic opportunity, climate change, gun control and racial justice was stymied by Senate filibusters and other maneuvers. Time and again, Obama expresses exasperation in his memoir, as he did at the time, about the difficulty of getting elected officials to focus on what matters for the future of the country, rather than the distractions and lies promoted for political purposes.The truth is that Obama was never in a position to implement a transformative reform agenda like Franklin Roosevelt or Lyndon Johnson. He lacked the legislative super majorities they had. He did not exert similar influence over the public discussion in a country now pervaded with fractured and scandal-hungry media companies. Roosevelt used radio to enter Americans homes, as his opponents could not, and Johnson nurtured close relationships with leading publishers and reporters. Obama confronted a journalistic community filled with for-profit actors seeking to undermine his authority and pander to the prejudices of their viewers.Many of the most crucial policy issues were complex, requiring careful attention to details that did not match partisan presumptions or media soundbites. Designing financial and environmental regulations, for example, demands an appreciation of both markets and government’s role to protect the public good, rather than a knee-jerk defense of one position over the other. Although Obama assembled a talented team of advisers to penetrate these complexities, he could not find enough partners in Congress or explainers in the media.

Obama’s worst day as president 02:01No reader will be surprised that the former President directs his ire largely at Republicans. Obama does not deny that Democrats were also partisan, but he contends that his party followed the rules, adhered to the truth and tried to improve the country. He admits to many blind spots and limitations, and he criticizes the excesses of his own supporters who were impatient for immediate change.Obama explains that the Republicans took a dangerous step further to fight a self-declared war on a Black President they just could not accept. Writing about Donald Trump’s “birther” attacks, the former President’s anger jumps off the page: “It was clear that Trump didn’t care about the consequences of spreading conspiracy theories that he almost certainly knew to be false, so long as it achieved his aims; and he’d figured out that whatever guardrails had once defined the boundaries of acceptable political discourse had long since been knocked down.”Obama does not target Trump alone; he sees a wider group of Republican enablers, determined to undermine his presidency at all costs: “There wasn’t much difference between Trump and [House Speaker John] Boehner or [Senate Majority Leader] Mitch McConnell. They, too, understood that it didn’t matter whether what they said was true. They didn’t have to actually believe that I was bankrupting the country or that Obamacare promoted euthanasia. In fact, the only difference between Trump’s style of politics and theirs was Trump’s lack of inhibition.”These domestic difficulties followed Obama abroad, complicating nuclear negotiations with Russia, peace efforts around Israel and American responses to the Arab Spring. The book’s foreign policy chapters expose Obama’s own uncertainty about how best to pursue American national interests abroad, but they also show little help from across the aisle.

Trump hangs over Obama’s memoir like an onrushing trainObama was a liberal internationalist by inclination, devoted to multilateralism and building cooperative global institutions. He supported international climate negotiations, he pursued free trade agreements and he sought allied support for the use of military force. He refers at least three times to the fall of the Berlin Wall and the end of the Cold War as models for how American power could encourage change through trust and cooperation, not militant unilateralism.Obama’s internationalism left a mixed foreign policy record, as he himself admits, and it motivated Republicans to abandon their own longstanding internationalism so that they could flaunt their anti-Obama credentials. Former Republican internationalists, like Senators Lindsay Graham and John Cornyn, transformed quickly into “America First” advocates for the purpose of cutting down the President. Foreign policy exacerbated divisions at home.

The only exception is the climax of Obama’s memoir: the killing of Osama bin Laden. The former president offers a gripping account of the difficult decisions surrounding the Navy SEAL raid on May 2, 2011. The operation was secret, so bipartisan consultations were not necessary. Success in eliminating the al-Qaeda leader brought Americans together in collective relief, at least for a short while. Obama remembers: “All of us in the White House could feel a palpable shift in the country’s mood…For the first and only time in my presidency, we didn’t have to sell what we’d done. We didn’t have to fend off Republican attacks or answer accusations from key constituencies that we’d compromised some core principle.”Get our free weekly newsletter

His depiction of that moment, and the collective response it drew from the public, feels far away from the American present. We need not abandon our parties, but we must prioritize serving our country. Obama offers a compelling account of his own sincere service to improve the American nation that he loves. He asks how we can summon a return to the broader public good, and a rejection of narrowness, in all of our leaders. Perhaps we can start by spotlighting models for service above selfishness, starting with our new President-elect.